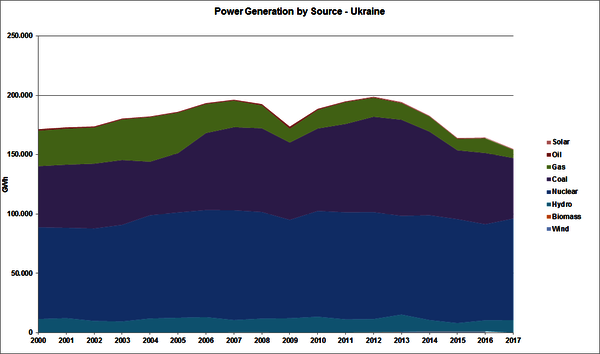 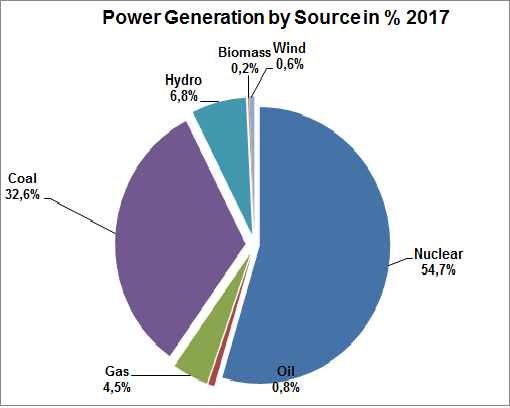 In 2012 the annual extraction rate in Ukraine was about 2 to 3 million tons of oil (-4.2% compared to 2011) which allowed to cover about 20% of the country's needs. As a result the domestic oil and petroleum products are sensitive to fluctuations in foreign markets and, simultaneously, depend on the economic and political situation in these countries.

Extraction and transportation of oil is controlled by companies that are part of the vertically integrated structure of "NaftogazUkraine", in particular, the extraction is carried out by the National Joint Stock Company "CHORNOMORNAFTOGAZ" and by PJSC "Ukrneft." Transportation of oil is done by PJSC "UkrTransNafta". Other companies produce about 10-15% of the oil in the country

In 2010, 54 Mt of coal were extracted. Many political conflicts have disturbed the country's coal production, which has decreased by 60% since 1990 following the closure of numerous mines. Ukraine's coal exports (mainly to Belarussia, Poland and Slovakia) are falling sharply, and in 2010 the country had to import 7 Mt of coal.

The future of coal production is uncertain: production conditions are degraded; the installations are old and need to be modernized, meaning they are not very productive; production costs are increasing, and the environmental cost is high.

Ukraine consumes significant amounts of natural gas, however, locally produced gas covers needs only to up to one-third. Every year the country produces about 18-20 billion m³ of natural gas. Over the period 2009 to 2012, gas consumption varies in the range of 45 to 60 billion m³. Due to the geographical location, the territory of Ukraine serves as a gas transit for Europe.

As reserves of natural gas in Ukraine do not cover all domestic needs, gas imports are necessary. For a long time the largest supplier of natural gas to Ukraine was Turkmenistan, which accounted for two-thirds of imports. Russia supplied gas mainly as payment for transit services to Europe. However, in recent years almost the entire volume of imports comes from Russia.

With the prices of imported gas at their highest level ever, observed in recent years, the Government and ministries try to develop and implement measures to diversify gas supply channels and reduce dependence on foreign suppliers.

As a consequence of the decision of the Government of Ukraine with respect to renewable energy a significant increase in the production of electricity by wind power was established. Particularly in 2011, the amount of energy produced by wind power plants amounted to 89,5 million kWh and increased to 288,2 million kWh in 2012 and to 638,6 million kWh in 2013, representing an increase of more than 600% within two years. Similarily, electricity capacity by solar power increased from 148,2 MW in 2011 to 319,3 MW in 2012 and to 612,3 MW in 2013.

Note: The possible differences between total and its components are due to rounding. Source: http://ukrstat.org/en/operativ/operativ2012/pr/etgv/etgv_e/ele_ve_11e.html

Below you can find the mix of primary energy supplied in Ukraine. 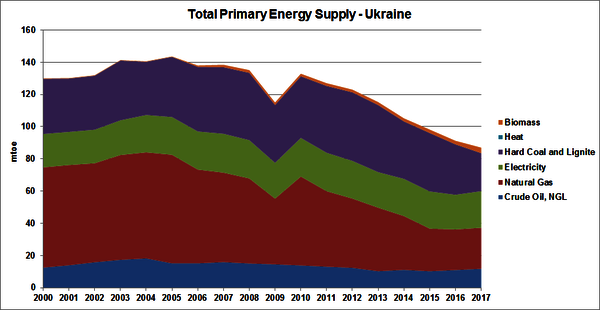